Since there were still heavy covid restrictions and no chance to sleep somewhere we decided not to go to JO60OM for multi-Op. I was planning to be part time qrv from home in JO61UC. Since i completed my test-setup of the Iceni 70cm transverter i was able to operate 3 bands, 2m,70cm,23cm. More bands are not possible because the mast is too short and 13cm is not ready yet.
Despite i thought different my main operating time was saturday afternoon. I started with 70cm because i was curious for this band that i never operated from home before. It started very slow, almost nobody qrv in the beginning. During the contest some nice QSO came on top with S59P and S57M. Keep in mind that this is only 5ele and 50watts. 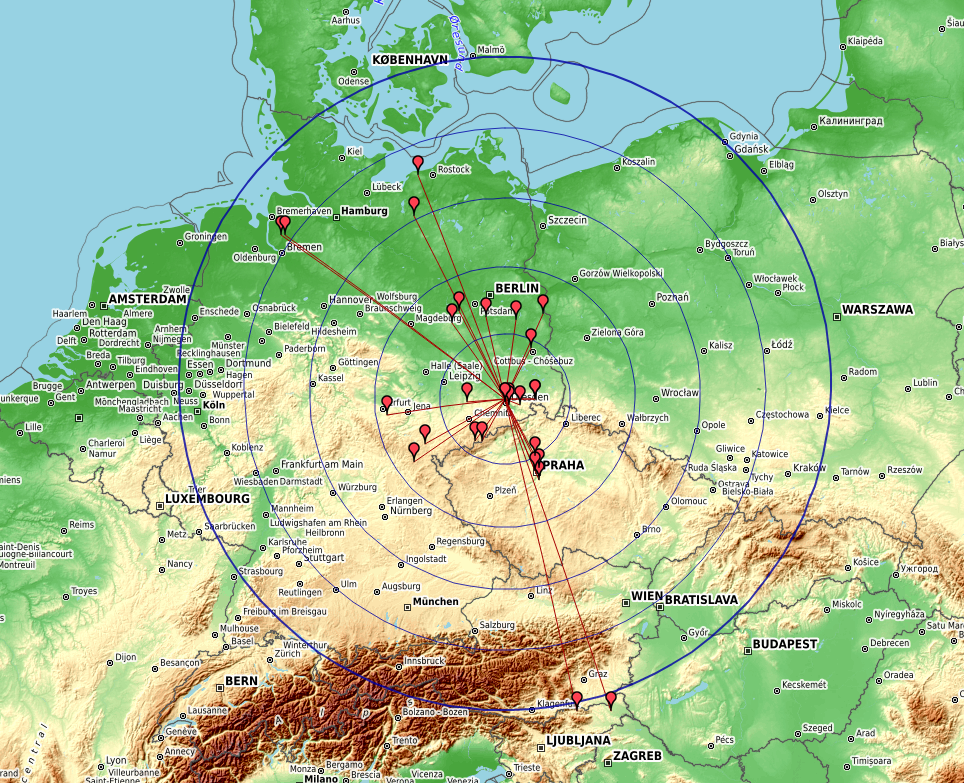 I later changed to 23cm and did some qso there. On 23cm it is a bit easier since i have 36ele and 100W. Many thanks to DL3IAS and DL3IAE for the ODX QSO via AS. 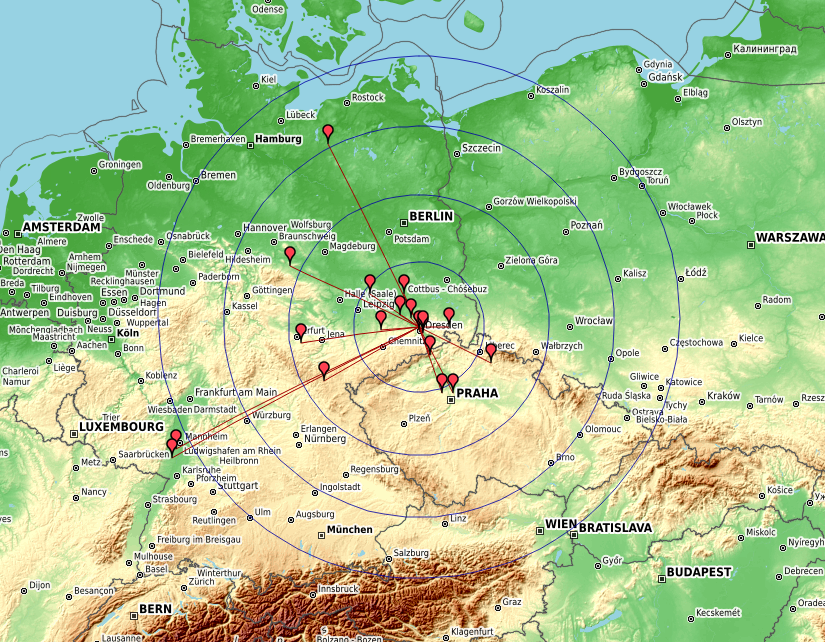 2m i started in the evening after the kids were sleeping. Unfortunately the conditions were very poor and i ended up with frustrating 20 QSO. 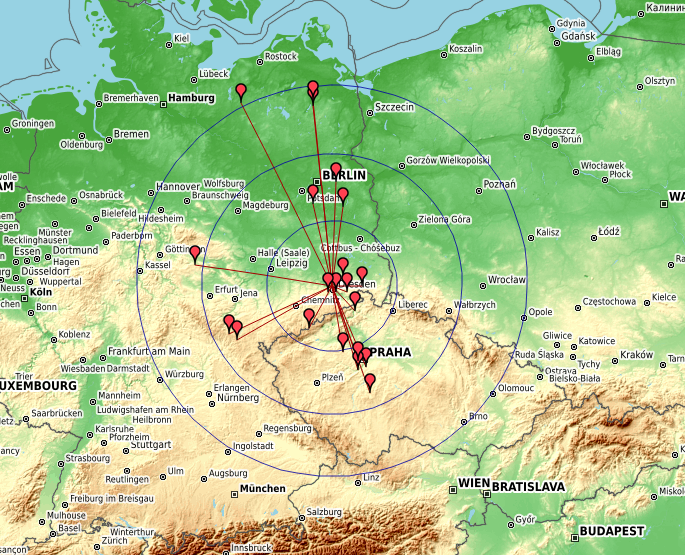 Overall the result was a bit disappointing with the highlights of the 70/23 ODX QSO and the fact that the 70cm transverter was working fine.

The diagram shows the output power of my G4DDK-Iceni transverter in relation to the input power.
It is quite linear up to 3dBm input / 20dBm output and drops relatively hard above. 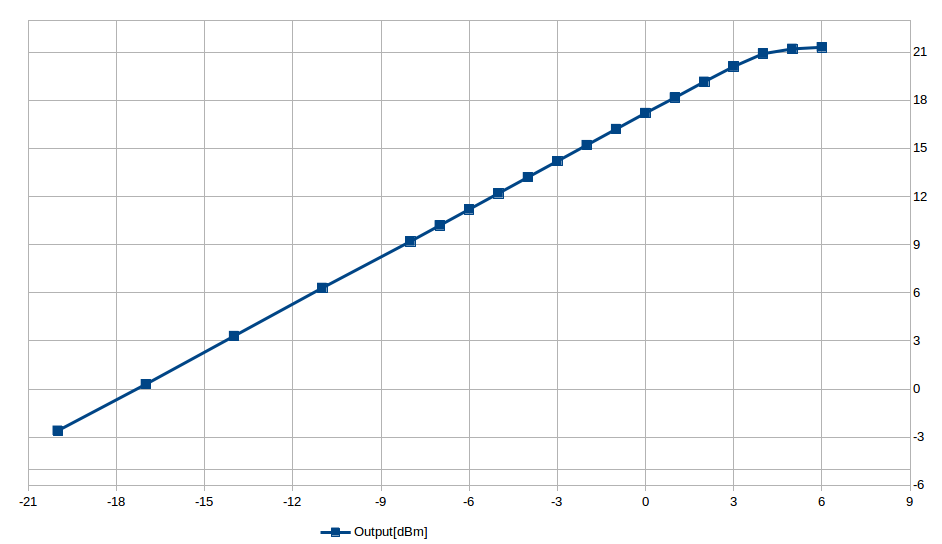 The 1090MHz filters arrived and i measured this variant plus one without filter.

Closer to the filter the response looks quite ok: 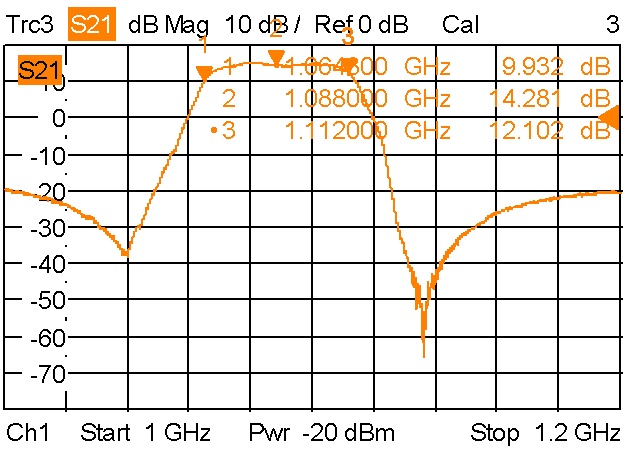 Far away from the passband the supression degrades. Especially very high frequencies pass the filter quite well. This is the assembly with 47pF capacitors and a 27nH coil for supply of the MMIC. Below 200MHz does not pass the capacitors well. There is even some remaining gain at 3.4GHz although its a 1.6mm thick FR4 PCB. 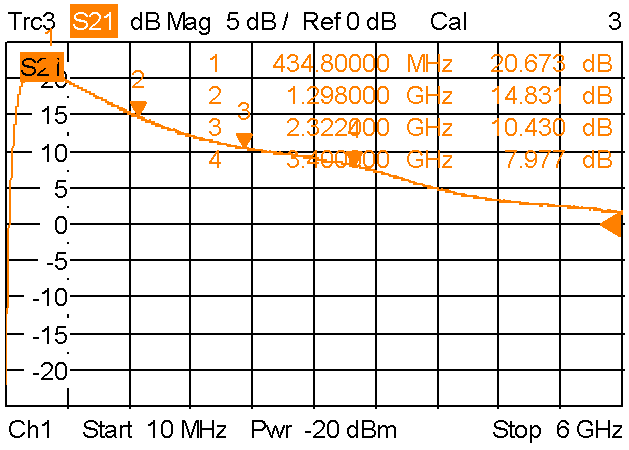 A while ago i tried the Eagle import capabilities of Kicad. I used a design of the baloon experimenteer “TT7” from Czech Republic and did some modifications to the layout. Since the LNA looked promising i sent the design for production and ordered some components. I had to replace some components for easier sourcing.
The MMIC i replaced with the compatible type SPF5043. Instead of the 3.3V regulator i used the variant with 5V output and up to 16V input. The options for the SAW filters are limited. The 70cm filters usually allow for the lower half of the band but the curve will degrade around 437MHz. A filter for 23cm and one for 13cm was availabe as well. The same for 1090MHz. Unfortunately none for 405nm was available. There is an option for phantom feed of the LNA as well as mounting an ESD diode. Unfortunately i did not care about the width of the RF traces. They are far to wide. Fortunately the trace in front of the MMIC is short. 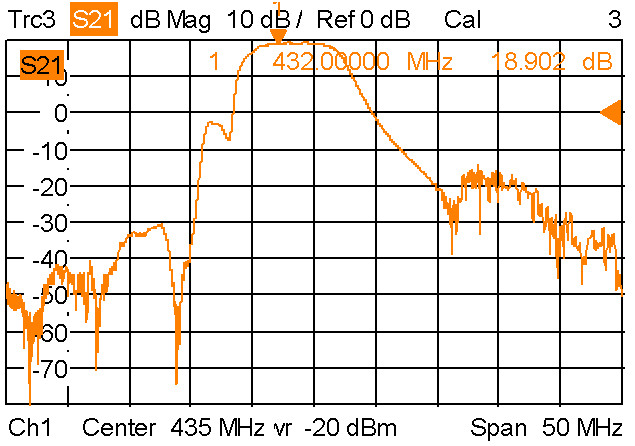 As written above the 70cm SAW starts to attenuate a lot around 437MHz. There was a type with broader response but it is available nowhere.
The overall gain is about 18..19dB which is in line with MMIC and filter datasheet. 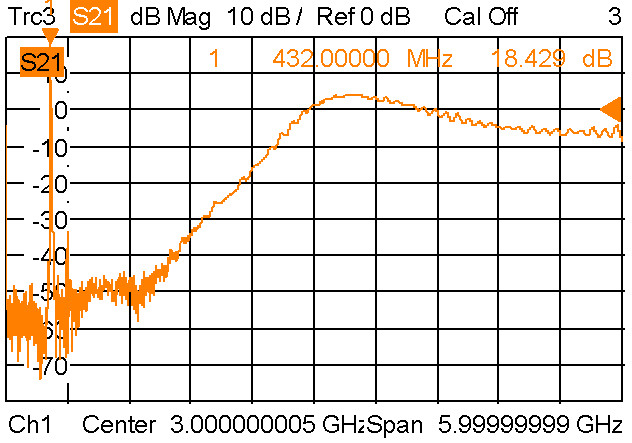 Looking to the wideband response of the filter reveals that it looses its filter capabilities over 1200MHz. 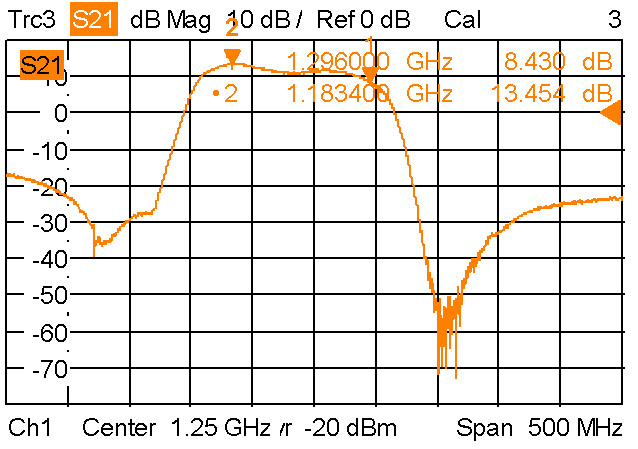 The filter used for 23cm is a bit wide. It exceeds the amateur allocation a lot at the lower end. At the upper end 1296MHz is already at the edge. The maximum gain is around 1180MHz with 13dB. For 1296MHz it results in roughtly 8dB gain only. 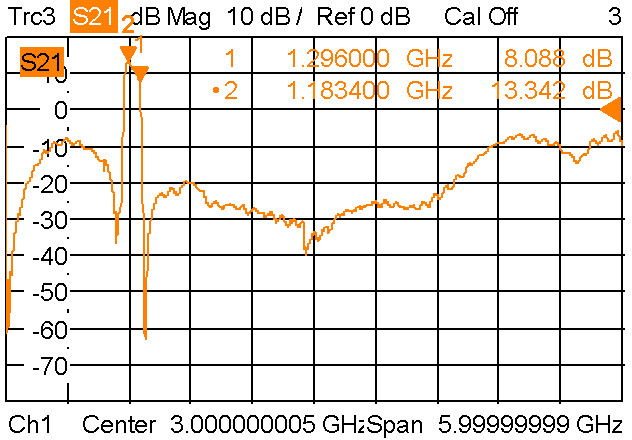 The filter capability is maintained over a broader range and de-rates at over 5GHz. The filter for 13cm fits pretty well. Although the MMIC has even less gain the filter also has less attenuation than the 23cm type on 1296MHz. Therefore it also results in about 8db gain. 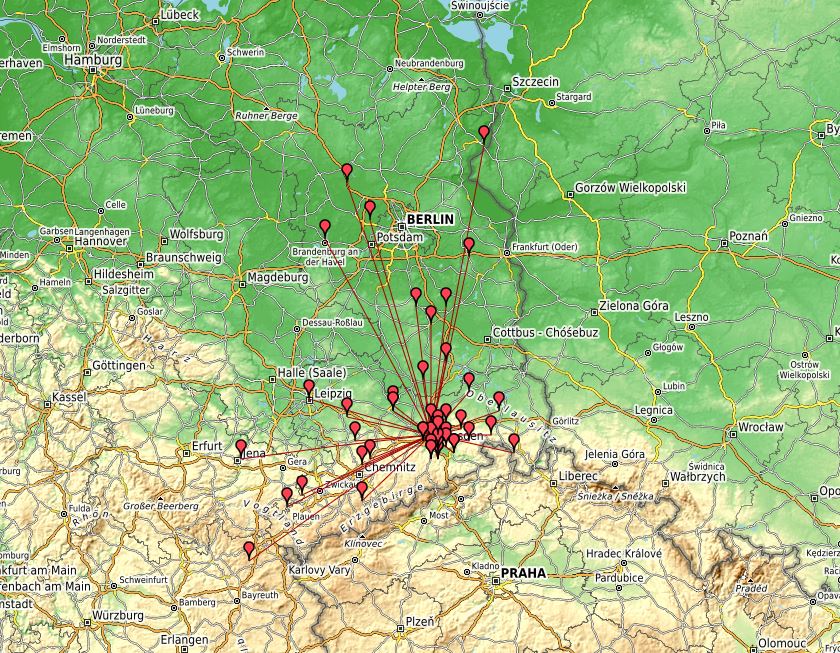 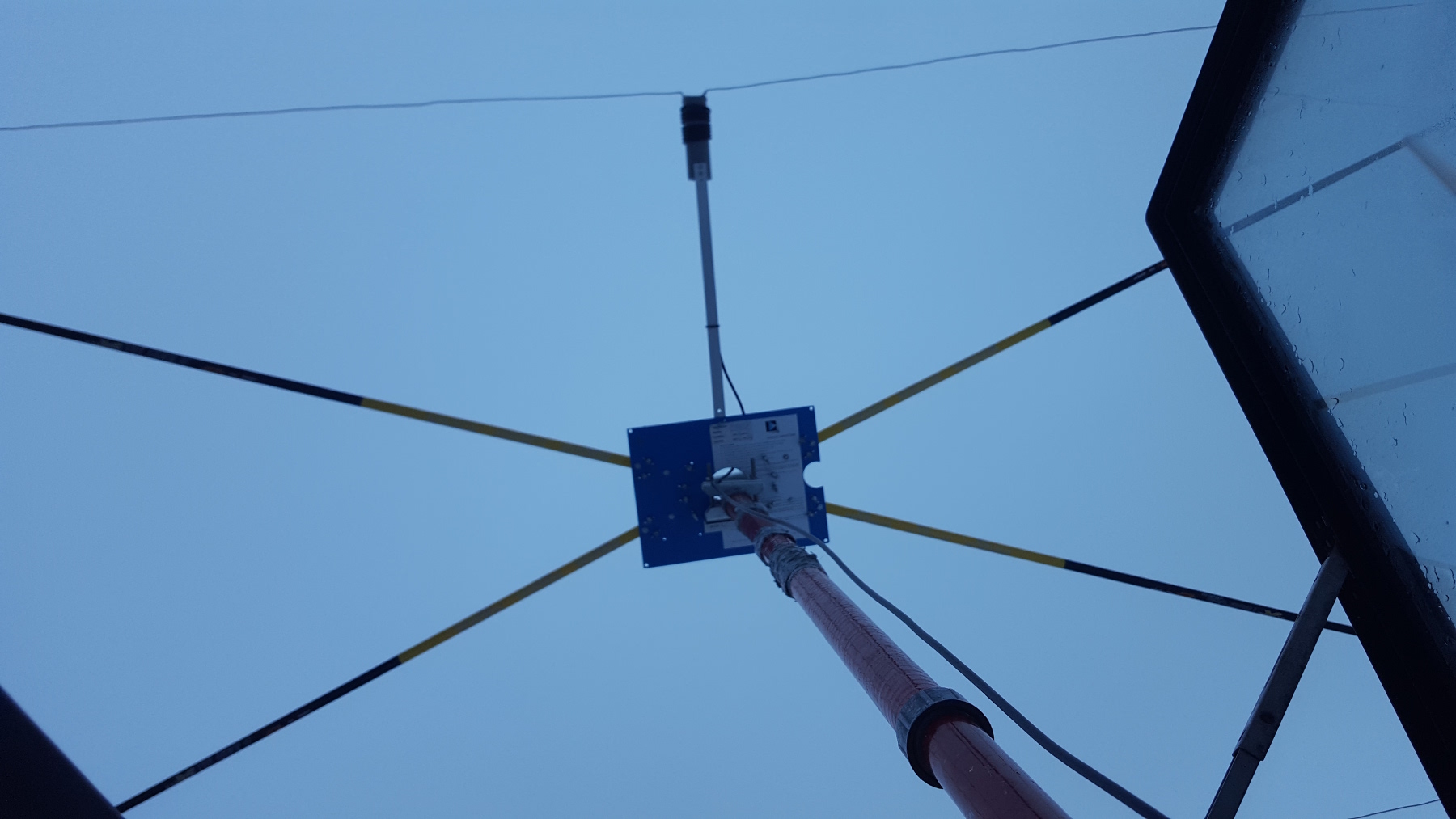 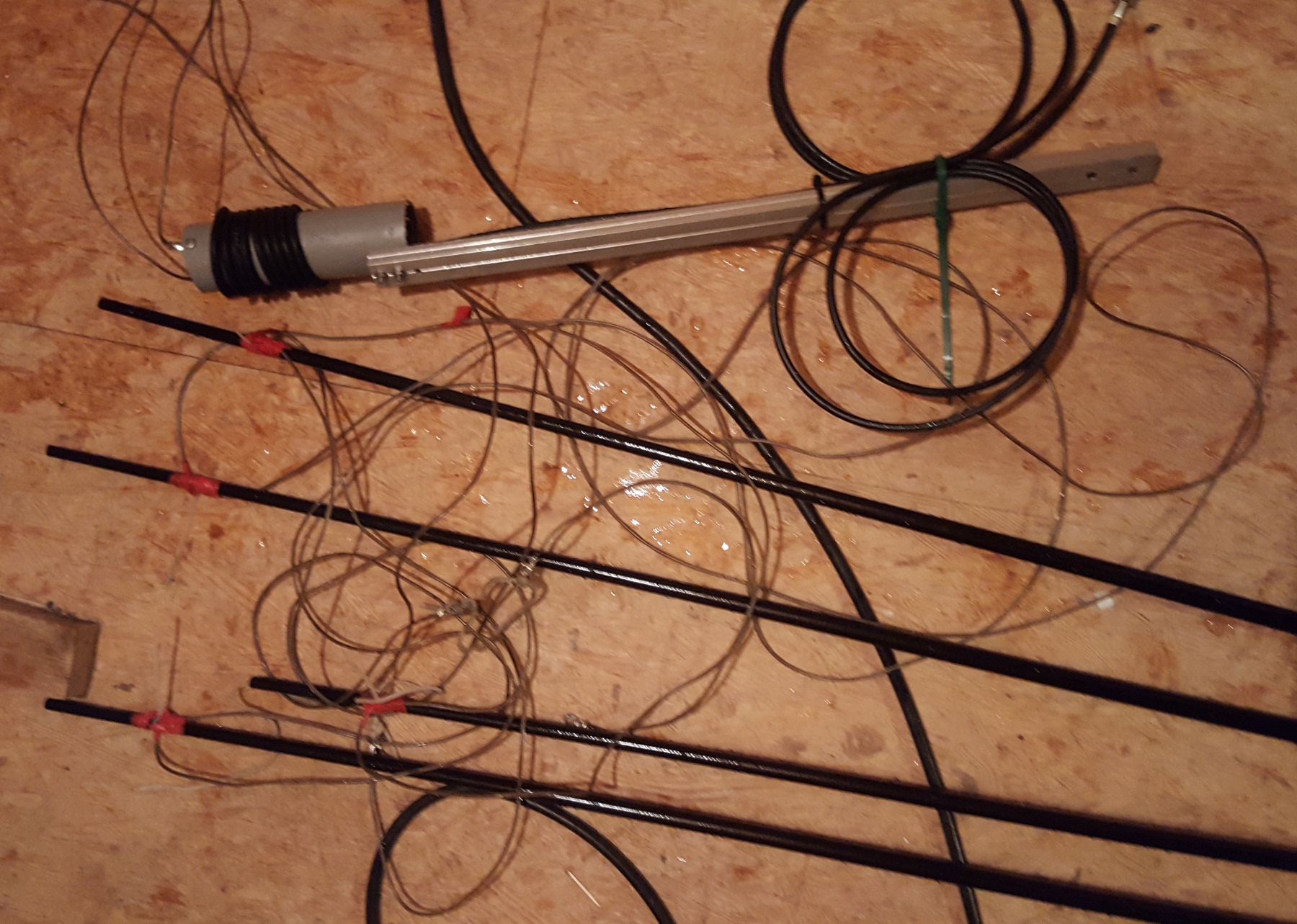 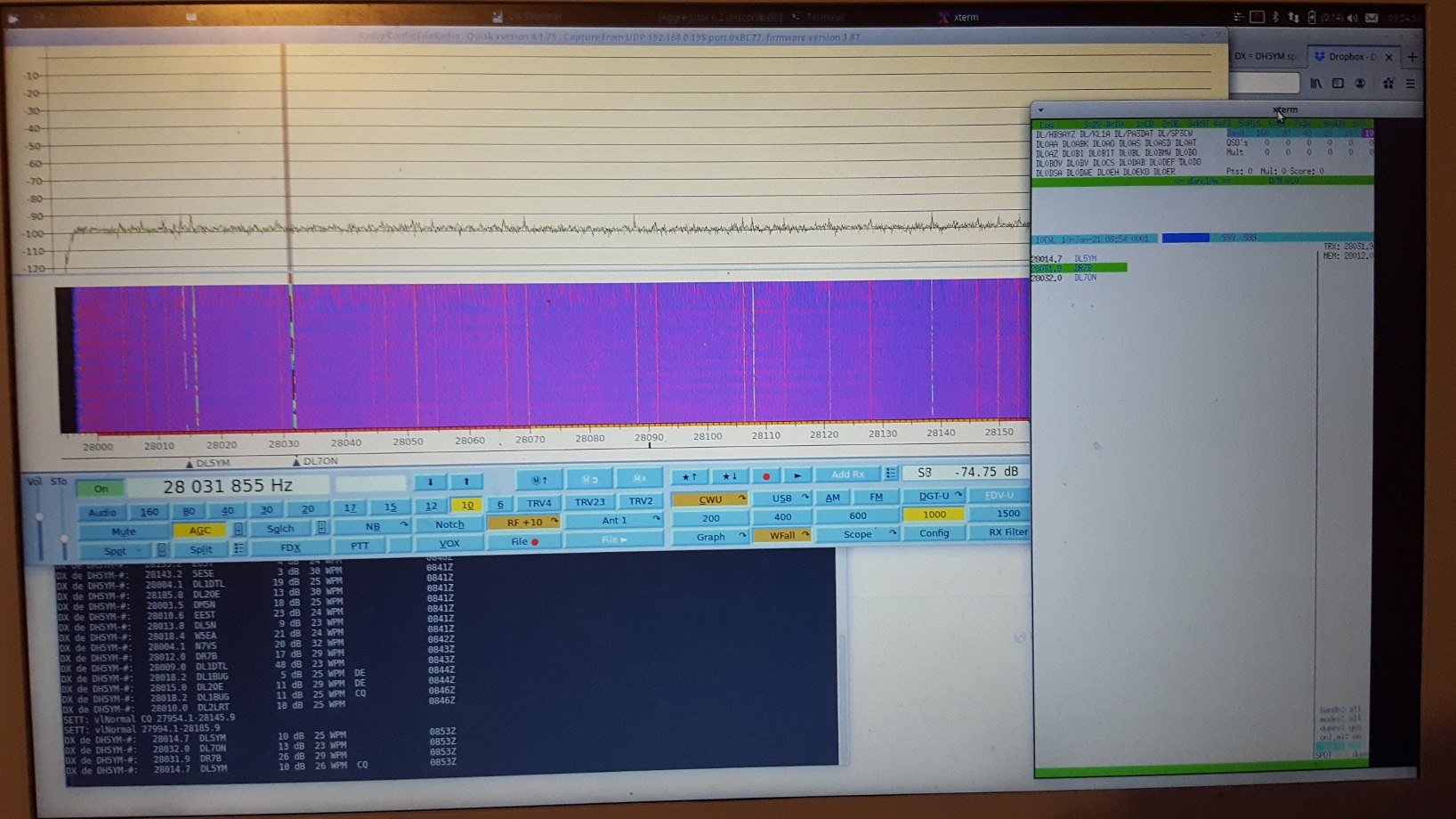 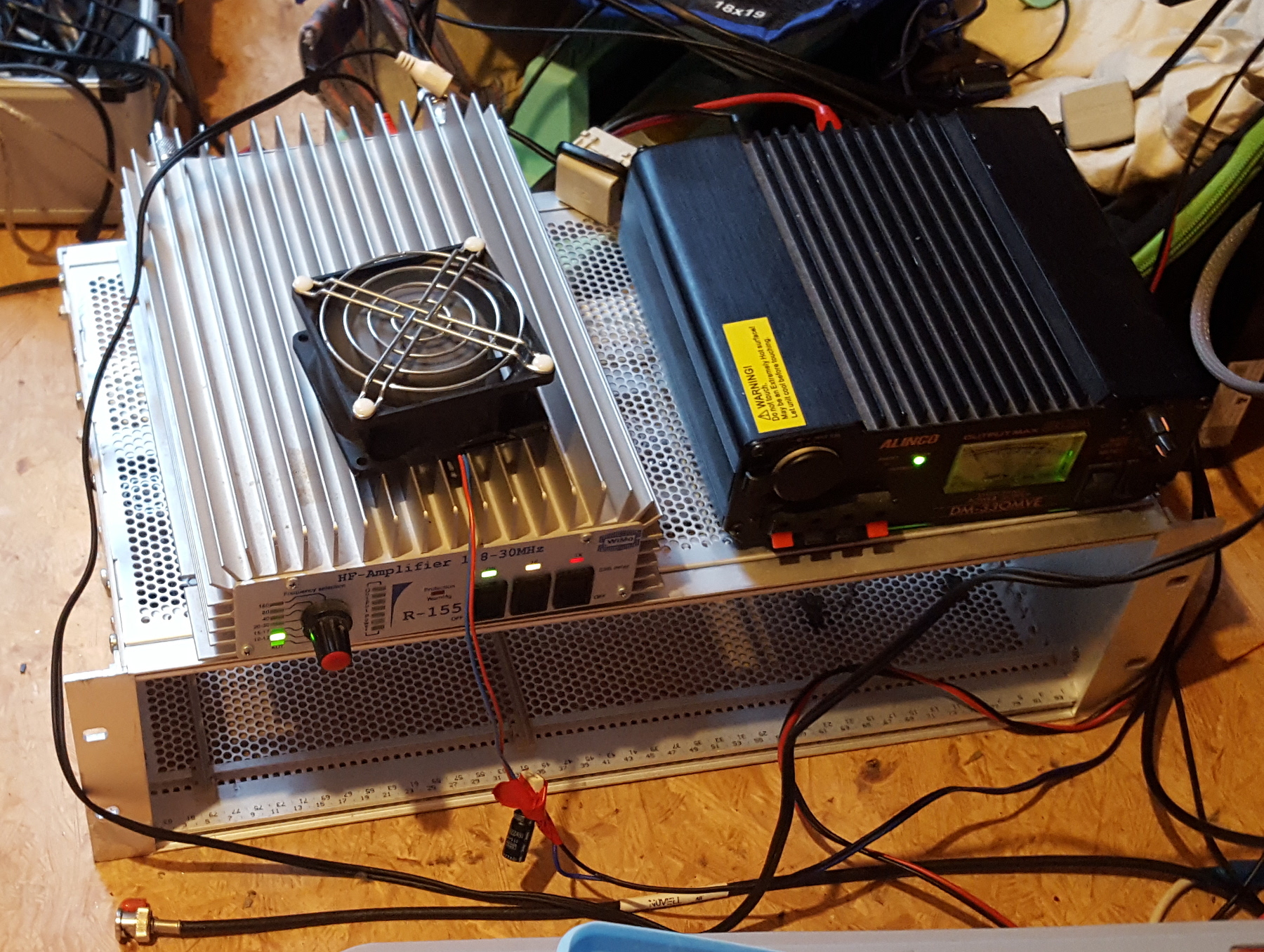 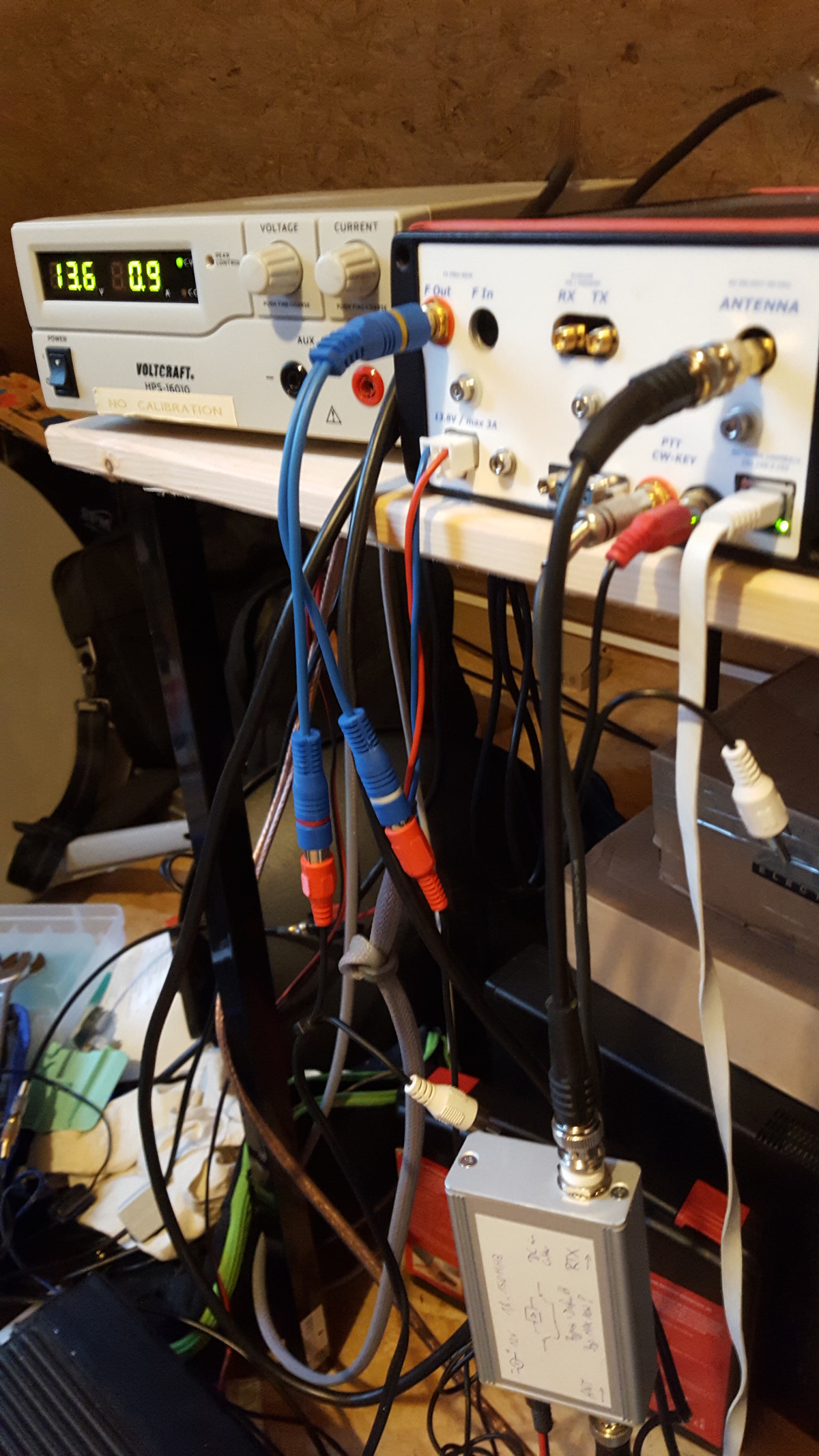 Due to partial lockdown no multi-op activity. Other weekend activities cancelled as well, so found some time to participate the MMC from home.
The setup was my usual HiQSDR + ME2HT + 200W Transistor PA + 4 ele.
About 11h operating time resulted in 134 QSO with ODX 730km..

It was pretty obvious that almost all the big multi-op teams where missing. Still some good DX oportunities even for my tiny station.
IQ3AZ was super loud. The attempts with SM6VTZ and YO5LD failed although we heard each other for short moments. 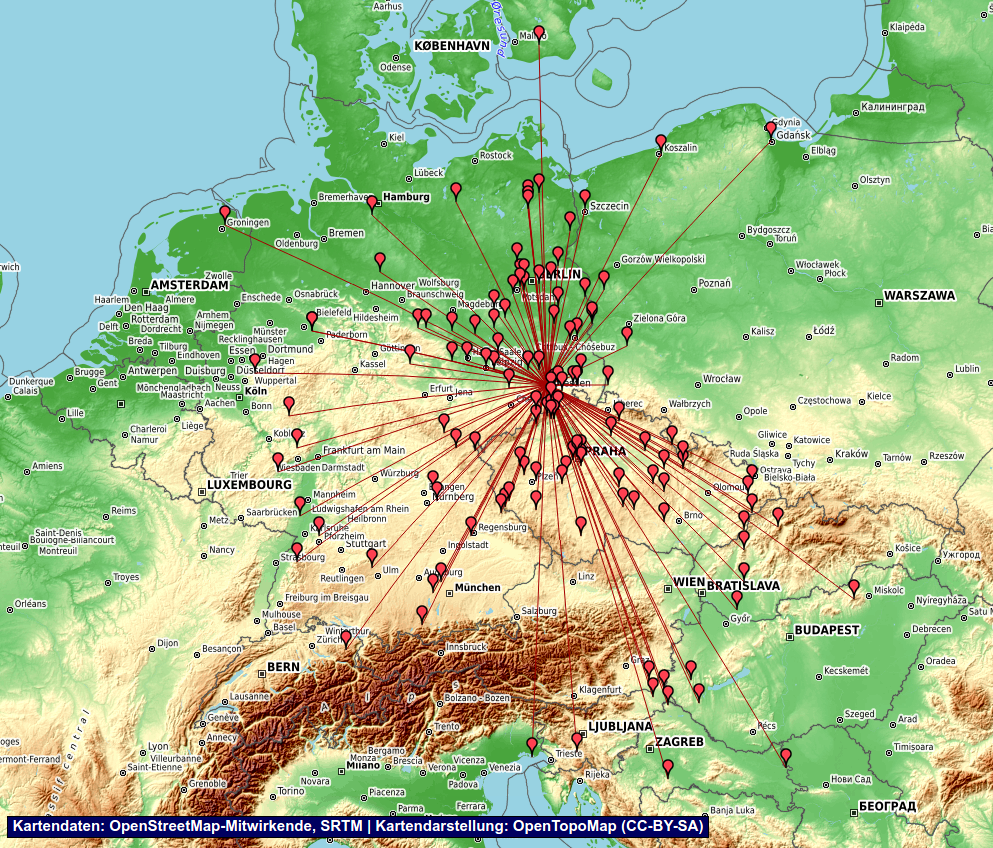 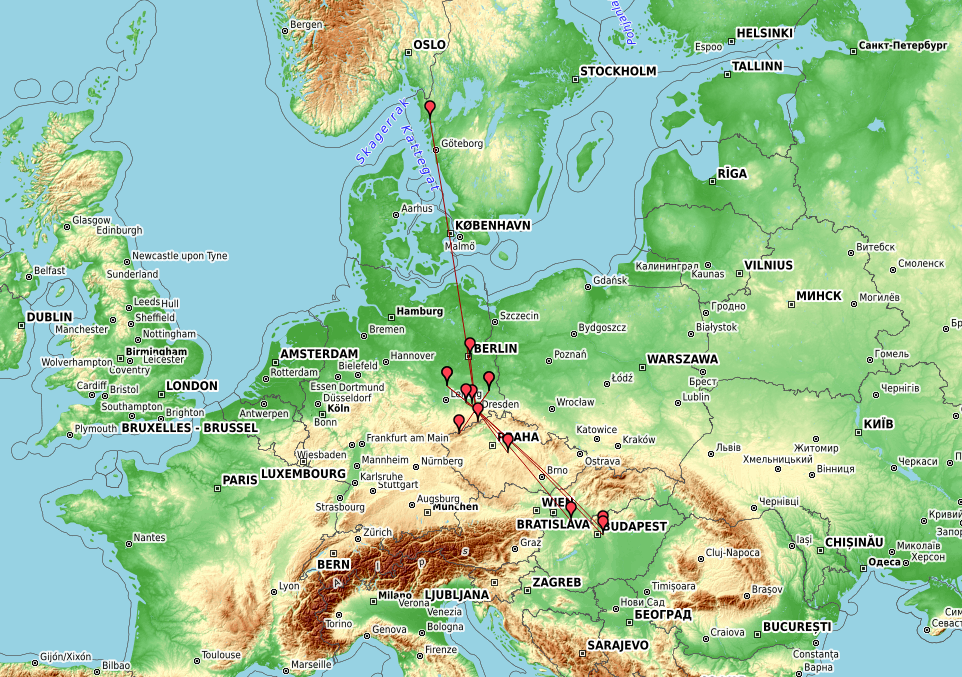 Originally planned some more QSO but in the end there where more time constraints than expected. Therefore only 21 QSO on 23cm sunday morning. I skipped all other bands. 70cm was not ready anyway. ODX HA5KDQ with >500km.

I planned to make some QSO from home. In the end i had about 10h of participation mainly during the night and sunday morning. The setup was 4ele and 200W with my HiQSDR and ME2HT transverter. The raw result shows 95QSO with highlights YT4B in CW random and IQ5NN even in SSB via aircraft scatter. 7S7V and 5P5T had pretty strong signals here.