Over a year ago i started building a little sequence control unit for transverter usage. The PCB i showed already here. Unfortunately i made a stupid beginners mistake and used a package that does not belong to the footprint. So the first PCBs can be just brought to life with a bunch of patch wires.

Now i found some time to bring the microcontroller firmware to a usable state and made a short video of operation.

The schematic you can find here:

Please notice that the attiny package shown in the schematic belongs to the package without leads which is not the one on the board !

The sequencer has a lowside switch for RXTX relais control and a highside switch for PA supply control as the sequencers from DB6NT have. In addition there is a TX_INHIBIT output that can be used to prevent your Yaesu radio from transmitting until the sequencer has switched to TX entirely. Alternatively you can use it as PTT signal for your transceiver. And there is a kind of “sequencer active” signal that only switches to ground if the sequencer is in TX state (in the schematic its named ERR_OUT but i used it for this function now).

In contrast to other sequencers this one has an error input. If this input is keyed down only the RXTX relais is switched on and the rest of the functionality is locked (means the sequencer cannot switch to TX anymore). It is necessary to release the error input and the PTT to get back to RX state. Together with the “active” output this can be used to lock several transverters against each other for example if they are used with a common dish.

In addition i equipped the board with a ULN2003 darlington array that can be used as 7 port lowside switch to realize further switching outputs.

As i told before a somehow messed up the layout. Thats why i do not publish it here. If there is some interest i can update it to the correct package and make it available. However i show some more pictures of the prototype unit. 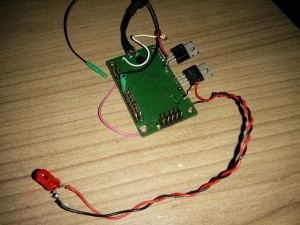 top side – LED at the PA output, lamp at the relais output 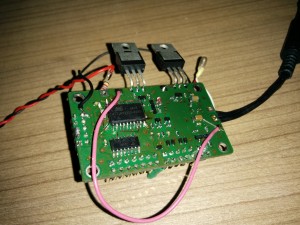 In the second pictures you see the necessary patchwires. Fortunately GPIO are software configurable ;)

Switching behavior is normal for a sequencer. The yellow line is PA relais output, the green line is the PA supply voltage, the blue line is the TX_INHIBIT output. The PTT input signal is not shown here but was asserted from start of relais until the TX_INHIBIT signal goes high again. 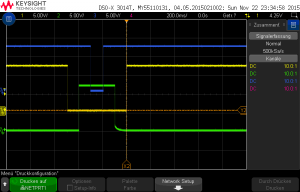 Further ideas for the circuit are welcome. Some i already got. E.g. controlling rotary RF switches. I will look into that.

Last weekend i was able to participate in the Marconi Memorial VHF Contest. First of all many thanks to DL4DTU and DL3DTS for giving the possibility to use their great QTH in JO60TR together with the antenna group 4x9ele + the amplifier !

I used my HiQSDR already few contests before. Now i wanted to try on 2m as well. I decided to purchase a ME2HT-Pro transverter which perfectly fits the transverter input/output of the transverter. You can see the setup on the picture below. 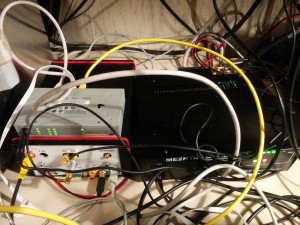 The SDR is controlled from the Quisk software. I usually use 196kHz bandwidth setting. This time i tried the CWSkimmer software. Quisk can forward the received baseband samples to a audio loopback device which is fed into the skimmer running under Wine.

The first time i used the very powerful Tucnak log from OK1ZIA. The log got the skimmer spots. In addition also Quisk connects to the skimmer. If the center frequency shifts Quisk tells the skimmer the new center frequency. This is required to always get correct spots. From the bandmap and the cluster window of Tucnak its directly possible to control Quisk like a hardware transceiver. In addition Quisk has a 2nd RX that can be used  to listen to other frequencies in between the CQ loops. The picture shows the SDR PC on the right side and log PC on the left side. On request of some OM i also fed the skimmer spots into the reversebeacon network. Sometimes i had the impression that this caused sometimes other stations beeing faster than me ;) 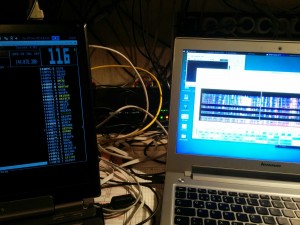 The big advantage of the skimmer connected to the local system was that i immediately noticed when DX stations were heading their antennas in my direction. Looking through the skimmer spots i noticed that i still missed quite some station from DX.

To avoid turning the antenna array all the time i decided to use a second antenna system. In addition to the 4x9ele of Norbert i mounted my DK7ZB-Oblong to one of the other masts at the QTH. The array ran with about 400wtts and the omni antenna with about 200wtts. Reception was selectable from either the one or the other antenna.

Overall the setup was working quite well. The only part that really caused a lot of trouble was the sequencer required to switch the various relais in the correct order. The microcontroller in the setup had problems to keep the PTT. Impulses from the switching relais caused the PTT input of the sequencer to raise for a short moment and afterwards the PTT was not detected anymore. Sporadically my transmissions got interrupted by that effect. Sorry for that. In addition i had some minor trouble configuring all the software correctly since the IP network setup was quite different than at home. I also had to extend my wireless internet access 2 times. One time because the Windows VM with the aggregator software wanted to download a Windows10 update ;)

In the next picture you see the map of the worked stations. The result was about 250QSO and a bit over 80000 points raw score with a average of about 300km per QSO.

Last but not least i want to show some spectrum screenshots from the contest.

The Erzgebirge is known to have a high density of VHF contest stations from OK and DL. Therefore the band is very full. 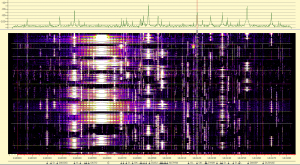 Example 1: Phasenoise of the transmitter 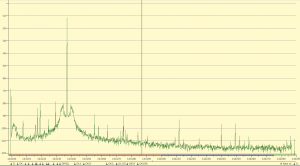 This is really a poor example since the noise is less than 70dB below the carrier.

In that example the spectrum of the oscillator is a lot better. But the hard keying of the TX causes leakage to other frequencies about 85dB below the carrier. The level was rather low but remember the proximity and the high antenna gain and TX power.

I wonder if someone can give me honest feedback about my own TX signal…? 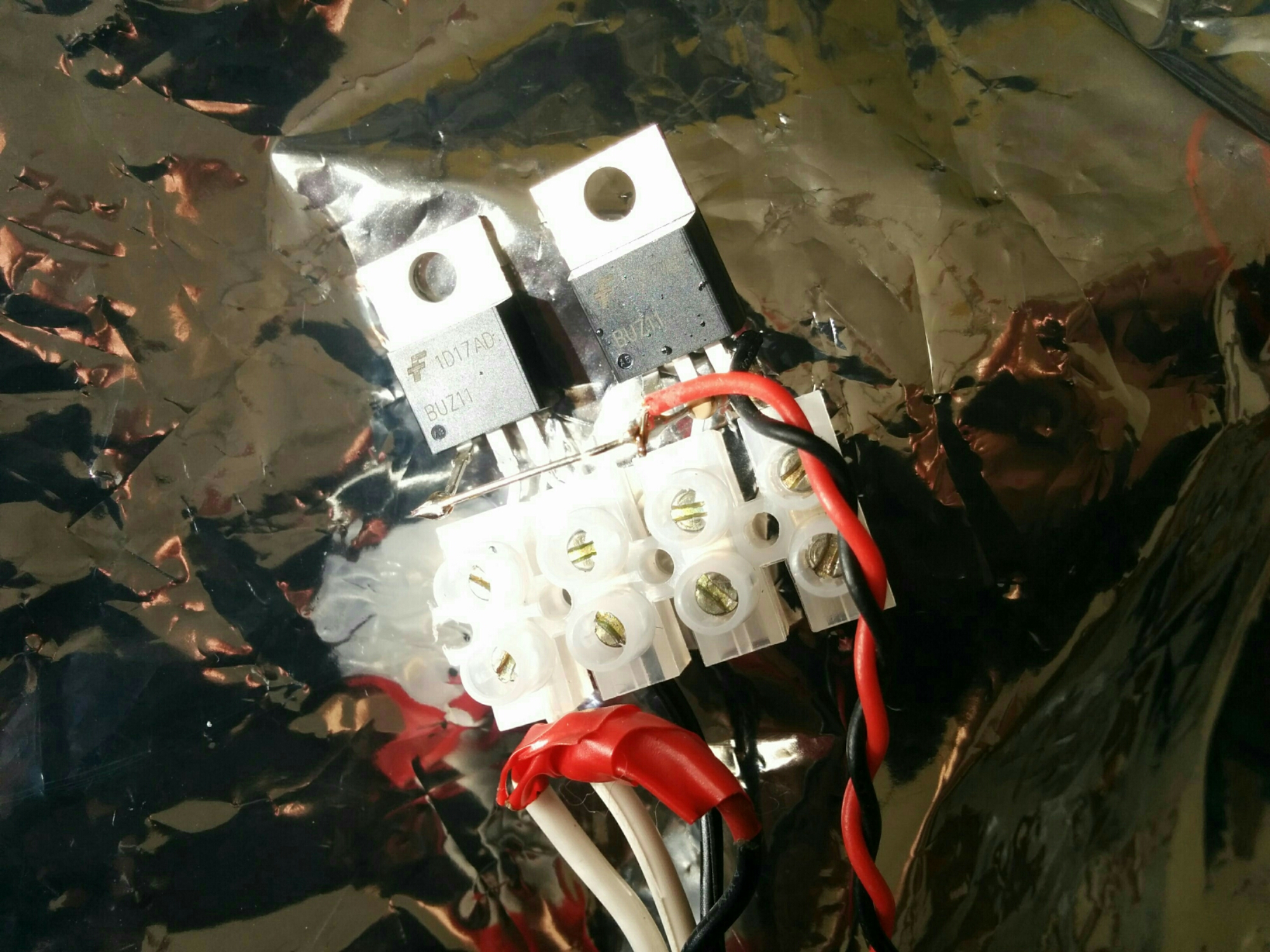