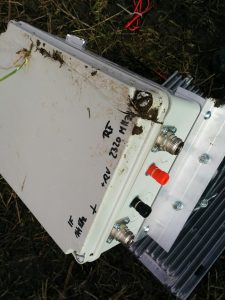 Since some time i own a DF9NP GPSDO. Currently i only use it to lock my signal generator but i also want to use it for my microwave transverter OCXOs. When connecting a SMIQ signal generator and checking the signal output at 6GHz i noticed some +-50Hz jitter under the poor reception conditions at thelocation of this signal generator. So i want to look a bit closer into that topic. In China i ordered a Neo-M8N module that can be configured to provide a 10MHz clock at its timepulse output. I tried to compare it with the GPSDO and the OCXO of my SMY-02 signal generator.
Of cause the digital clock has significant jitter because it is generated by a CPU (specified with +-10ns). 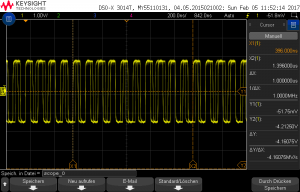 The picture of the timepulse at 10MHz shows, that it seems that comparing the clock to a stable oscillator over a relatively short period could be sufficient for adjusting the frequency of this oscillator to the GPS. 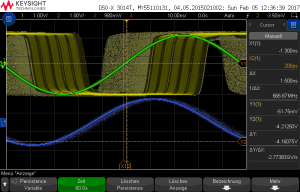 The screenshot shows the oscilloscope triggered to the GPSDO (green). The output of the M8N module (yellow) shows the jitter and the adjustment range within 60 seconds (yellow shadow). The third (blue) trace comes from my SMY-02 which was locked to the GPSDO. The SMY signal shows some slight jitter compared to the reference. To me it is not clear if the cause is the reference or the locking in the generator. The clock from the M8N module shows significant adjustment of the clock frequency within the 60 seconds shown compared to the GPSDO which has a TCXO that is slowly compensated by the GPS inside the reference.
Looking to the signal in frequency domain shows this picture: 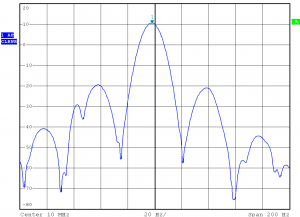 There are rather close sidebands that require narrow band adjustment of a oscillator eventually locked to this GPS clock. Wideband the spectrum is noisy as well.

Finally i took a short video showing the the scope triggered to the 10MHz OCXO reference of the SMY and comparing the GPSDO and the M8N output. The OCXO is slightly off 10MHz and therefore the picture is moving all the time. You can also see that the M8N is slowly adjusting compared to the GPSDO output.


GPS 10MHz GPSDO vs Neo-M8N and 10MHz OCXO
Watch this video on YouTube.