Update
My 1st place for 23cm in the german competition survived the logcheck. I am happy with the result although i have to say that there was only one strong competitor DK2MN in the single-Op class. Compared to may the 1st place result is about 12k less. The same points would have been place 9 in the multi-op class this time. Thats quite some difference.
My unplanned 10GHz operation brought position 16 at least.
http://ukw-funksport.darc.de/ukw/result/2016/jun-2016a.txt
—

I was operating from JO60OM, Hirtstein. The equipment was as few times before: HiQSDR, DB6NT Transverter, PA 2x100W, 1.5m dish and Quados8 antenna. The thing that worked well for the first time was the control of the antenna from VUSC log via my rotator control unit. Entering the locator, press ctrl-?, here we go.

It seems because of the thunderstorms in many regions over Europe the activity was not very high. Still i made 107 QSO and about 25000 points. ODX was YU1LA  840km via aircraft scatter.

Saturday morning before the contest i decided to take the 10GHz transverter and the 40cm dish with me. That was a good choice actually. Although i just operated that on Sunday and only in north direction i made 19 contacts. ODX was PA0BAT about 500km. 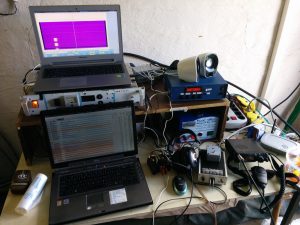 june 2016 rig after the contest