Recently i purchased a cheap RTL2838+ R820T device from a vendor from Hongkong.
The cost was about 10 Euro including shipping.
The video shows some reception with the SDRSharp software.
Tuning range is from about 24MHz to about 1750MHz. I discovered no gaps so far.

RTLSDR from Hongkong (short demo)
Watch this video on YouTube.

Since a long time David Rowe VK5DGR works on a open-source low-rate voice codec. This project is called codec2.
Now a variant of this codec is used in a amateur radio digital voice mode that was evolved out of the well known FDMDV software.
The mode uses OFDM with 14 carriers DQPSK and 2 pilot carriers with twice the power modulated in DBPSK.
The bandwith is 1kHz, so 2 of the signals would fit to 1 SSB channel. The datarate of the voice is 1375 Bit/s + some data bits for callsign information etc.
Its intended that in the end this mode can also be used for DX connections. Lets see what live tests will bring. On 20m obviously the frequency 14.236MHz is used as center of gravity.
For using the mode you would need either a two-soundcard PC (one for connecting a headset and one for creating the digital modulation signal) or a SDR setup with virtual soundcards. Currently a windows beta release can be downloaded as binary. For Linux you have to download the source and compile it on your own. David created a nice Makefile that downloads and compiles all dependecies.
You find further information on the project page http://freedv.org/tiki-index.php.
Also some videos are linked that show the operation and the audio quality of this digital mode. 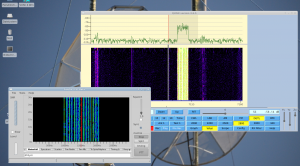 some experiments with FreeDV and Quisk

Last days i spend some minutes getting the RTL_TCP server running with OpenWRT Backfire on one of my WGT634U routers. These routers have a USB2 port and i can connect my NOXON DAB Stick directly.
I crosscompiled the packages. The sources and a Makefile for the OpenWRT build system you can get from the Osmocom page. You definitively need libusb for getting it running.
For the brcm47xx plattform you can find the both packages here:
librtlsdr_0.1.0-1_brcm47xx.ipk
rtl-sdr_0.1.0-1_brcm47xx.ipk
Attention: The both packages have not been added to my Packages file in the directory. So you have to copy them manually and install them to your OpenWRT. The dependencies are resolved automatically.
After that you probably need to configure the firewall on the router to pass port 1234 to the outside and the RTL_TCP server needs to be started with option -a #lan-interface-ip#, otherise the server will listen to localhost only. With my WGT634U i experienced that i cannot set the samplerate to 2MSpl/s. In this case the router reboots after a few seconds. With 1MSpl/s it worked smooth so far.
With running the server on a embedded system you can install the frontend at a completely different location than the client.