Not all things work out… I was searching for some nice feed for a offset dish to be used for 6cm narrow band. In the internet i found a nice version from Russia.
It was announced for the 5GHz WLAN band without dedicated specification of the exact frequency.
For 40 Euro including shipment it was ordered and after only 2 weeks in transit (russian saying tells: For bad children Santa Claus sends the gifts by russian post… ;) ) and 1 week in customs i finally got my russian present. 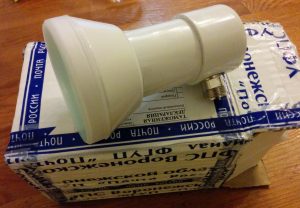 Measuring the input matching shows that its well in the middle of the lowest 5GHz WLAN band. 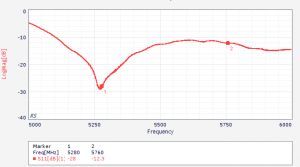 Far away from 5760MHz. But ok, lets try. First i removed the N connector. 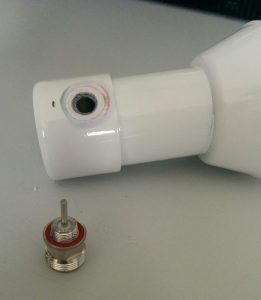 The connector with the radiator seems to be a robust construction. I tried to shorten it step by step. Unfortunately it happened what could be expected. The feed can be de-tuned to about 5.5GHz but above that the matching vanishes. Probably the distance to the backside of the horn is too big. So this one was a fail. Fortunately i can still use it for WLAN if i make the radiator a bit longer again. If you want to use the lowest of the 5GHz bands it is really a nice and very solid construction.
We use cookies to ensure that we give you the best experience on our website. If you continue to use this site we will assume that you are happy with it.OkNoRead more - Privacy Statement (Datenschutzerklärung)