I was searching for some simple LNA for microwave reception and found a very cheap board from China. For less than 10 Euro i ordered a LNA board that is specified to work from 50MHz to 6GHz. The gain should be about 20dB at 50MHz and still >10dB at 6GHz. Even if it does not work like that the PCB with shield and SMA jacks is still a good deal. You can find some measurement results below. The original condition makes clear that the gain on the upper frequencies is not good. Touching the bias network with the finger showed slight improvements. So it was clear that there is some problem with the components feeding the MMIC. Exchanging the ferrite bead by a 68nH RF coil gives much better results up to 4.5GHz but still has problems on the highest frequencies. So i tried a 2.7nH i series directly connected to the RF trace in order to avoid the stub that was there before. Now 6GHz is good but there is a resonance at about 3.5GHz. My last attempt was an additional 120nF to ground between the two coils. Thats pretty promising for the microwave bands but below 800MHz the LNA is not usable anymore. So the network still has room for improvement but it is at least clear that the board is usable. 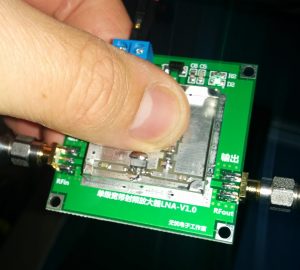 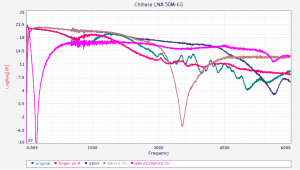